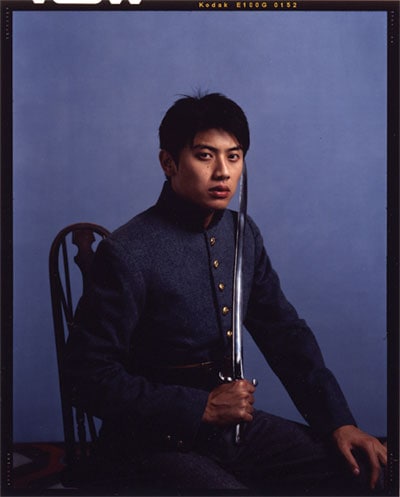 Bruce Yonemoto is a Japanese-American multimedia artist. His photographs, installations, sculptures, and films appropriate familiar narrative forms and then circumvent convention through direct, over-eager adoption of heavily clichéd dialogue, music, gestures, and scenes that click in the viewer’s memory without being identifiable. Working in collaboration with his brother, Norman Yonemoto, since 1975, Bruce Yonemoto has set out to divulge a body of work at the crossroads of television, art, commerce, and the museum/gallery world. As a complement to his body of work, Yonemoto explores intersections of traditional Japanese and contemporary American cultures. His work has been recognized by the National Endowment for the Arts, the American Film Institute, The Rockefeller Foundation, the Maya Deren Award for Experimental Film and Video, and a mid-career survey show at the Japanese American National Museum.

This digital photograph from the North South- East West series, 2007, centers on Walter Benjamin’s ideas raised about portrait photography and the vestige of the aura. Yonemoto researched the historical record and discovered that there were, indeed, soldiers of Asian descent in both the armies of the North and South. He realized that once again people of various racial backgrounds had been systematically excluded from the national record, even by recent revisionist histories. The costumes worn are rented from the oldest Hollywood collection house, Western Costume. Western Costume’s collection dates back to 1912 (the beginning of cinematic history) and includes Civil War uniforms used in D.W. Griffith’s infamous film, Birth of A Nation.