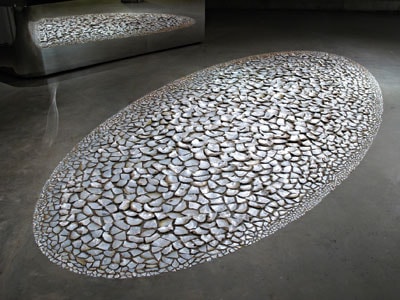 Lecture: Stories of loss and connection

Kay Lawrence is a visual artist and an academic. She was Professor and Head of the South Australian School of Art, University of South Australia from 2002-08. Prior to this appointment she was Portfolio Leader of Research and Coordinator of the Textiles Studio. She has a long association with the South Australian School of Art having been a student at the school in the 60s, majoring in painting and printmaking. She subsequently studied tapestry weaving at the Edinburgh School of Art, in Scotland in 1977-78 and has developed an international profile as a visual artist working in the areas of woven tapestry and drawing.

Her practice as an artist is grounded in textiles although her most recent work has encompassed installation as well as woven tapestry and other textile processes. She makes work for both public and private contexts as well as writing about contemporary Australian textiles. As well as exhibiting her work extensively in Australia and overseas she has completed a number of major tapestry commissions, including two works for the national Parliament in Canberra in 1988. For her design of the Parliament House Embroidery, she was made a member of the Order of Australia (AM) in 1989. In 1991 she was commissioned by the then Ambassador of the United States in Australia, the Honourable Mel Sembler and his wife Betty to design and weave a tapestry From Italowie to Chambers Gorge, for the Sembler Bank in Florida.

She is particularly interested in exploring the relationship of textiles practice to gender, place and community, and recently completed three major projects in collaboration with other artists and designers that involved consultation with Indigenous Australian communities. In 2001 she worked with six other artists to create the major installation Weaving the Murray for the Centenary of Federation of Australia. Drawing upon community consultation the work explored the importance of the Murray River as Australia’s major watercourse (currently in crisis) and its symbolic role connecting the settler and Indigenous communities living along its banks.

In 2002 she was commissioned with designer John Nowland to create a major public work for the glazed entry of the State Library of South Australia drawn from research into European and Kuarna knowledge systems. The work, Text, Textile and a Coil of string draws connections between textile processes and metaphors and the transmission of knowledge. In 2008 she curated the exhibition This everything water, exploring the symbolic resonance and material qualities of pearl shell as an item of trade and a sign for water for white and Indigenous communities in the Kimberley region of Western Australia. The exhibition showed a major body of her work and pearl shell engraved by Butcher Joe Nangan and Aubrey Tigan from the Kimberley.

Since stepping down from her role as Head of School at the end of 2008, she has re-engaged with tapestry weaving, (a medium whose time requirements are incompatible with a demanding management position) and is developing an oral history project to conduct whole-of-life interviews with 20 of the almost 500 women who were involved in stitching the Parliament House Embroidery between 1984 and 1988.

Lecture Synopsis:
Kay Lawrence will discuss four of her major public artworks created in collaboration with other artists and particular communities. Each of the artworks draws on textile processes and metaphors to investigate Indigenous and settler Australian perspectives on land, water and the transmission of cultural knowledge, during and after the colonization of Australia in 1788. The artworks are: The Parliament House Embroidery 1982-1988; Weaving the Murray 2001-2002; Text Textile and a Coil of String 2002-2003; This everything water 2003-2008. Each of these art works tells a story of loss through the medium of textiles, a discipline and set of practices deeply associated with ideas of connection and the transmission of culture in both settler and Indigenous Australian communities.