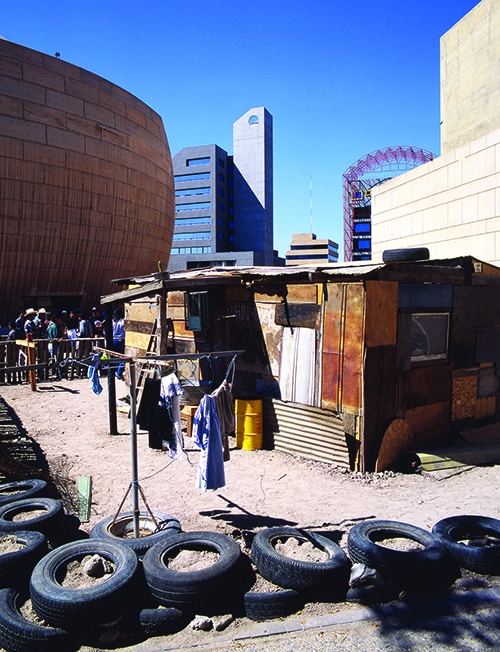 Century 21, 1994, installation view. Exhibited during inSITE94 on the grounds of Cento Cultural Tijuana.

Marcos Ramírez ERRE was born in Tijuana, Baja California, Mexico in 1961. He received a law degree from the Universidad Autónoma de Baja California and immigrated to the United States where he worked for seventeen years in the construction industry as a carpenter. In 1989 he became active in the field of visual arts; since then he has participated in solo and group exhibitions throughout the world. His work has been featured in numerous venues including InSite94, InSite97, the 2000 Whitney Biennial, the 2007 São Paolo/Valencia Biennial, the California Biennial 08, and the Moscow Biennial among others. In 2010 the Carrillo Gil Museum in Mexico City held a mid-career survey exhibition of his work. In 2007 ERRE received a United States Artist Fellowship; since 2009 he has been a member of the Mexican National System of Art Creators.

Working in a wide array of media and materials, ERRE is best known for site-specific sculptures that subvert the nature of their locations. For his project Century 21 he constructed a makeshift dwelling, typical of the colonias located on the periphery of Mexican border cities, on the grounds of the Tijuana Cultural Center (CECUT), which is the city’s showpiece museum. More recently he has produced works that examine narco-violence and the burden of complicity, shouldered by all spheres of Mexican society, in the perpetuation of such violence.

Special thanks to Confluencenter for Creative Inquiry for co-sponsoring this speaker.