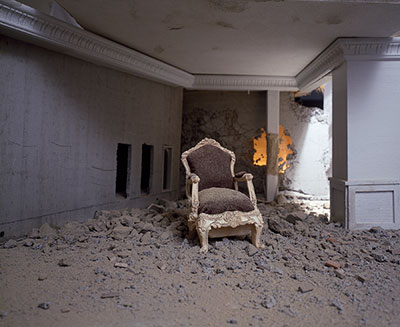 Wafaa Bilal, Chair from the Ashes Project, courtesy of the artist.

Wafaa Bilal uses diverse mediums including installation, photography, performance, “re-skinned” video games and even tattoos to provoke and challenge audiences. Now an Assistant Professor of Art at New York University’s Tisch School of the Arts, Bilal grew up in Iraq under Saddam Hussein’s repressive regime and came to the U.S. in 1992 after almost two years in refugee camps. Incisive and chilling, and at the same time playful and full of mourning, Bilal’s dynamic, participatory art blends technology and performance to engage viewers in dialogue. The controversial aspects of his work spark deeper conversation, posing questions about political and personal realities.

Bilal will discuss specific works including Domestic Tension aka Shoot an Iraqi, Virtual Jihadi and the 3rdi, reflecting his personal narrative and experiences living in both the conflict zone of Iraq and the comfort zone of the United States. He will also describe how different audiences around the world have responded to these provocative pieces, shedding light on various social and cultural dynamics and the way art can build bridges between people.

The Chicago Tribune called Domestic Tension “one of the sharpest works of political art to be seen in a long time.” City Lights published Shoot an Iraqi: Art, Life and Resistance Under the Gun, about Bilal’s life and work. Bilal is the recipient of a 2012 New York Foundation of the Arts grant and an international Freedom to Create, Commended Artist Award. Bilal has recently spoken and exhibited at The New School in New York; the Tate Modern in London; the Dubai Art Fair; and currently has a solo exhibition at the David Winton Bell Gallery, List Art Center, Brown University in Providence.