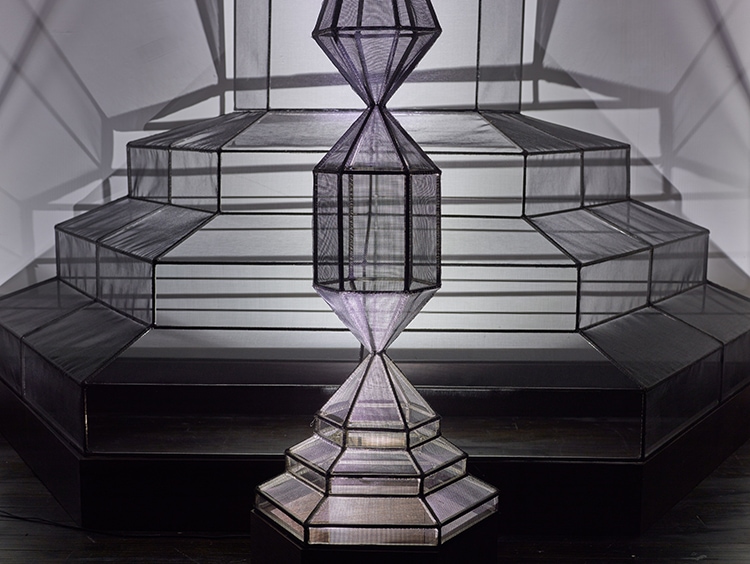 Lecture: The Architecture of Worship

What is the architecture of worship? It manifests as a house of prayer, a mausoleum, a secret niche inside a home, a white ghost bike on a desolate Bushwick street.

The power of the shrine is its ability to interrupt time and create stillness. The act of shrine building is an ancient human compulsion, an obsessive tradition from which my work takes its inspiration.

Afruz Amighi will discuss her choice of forms, medium, light and shadow, which are governed by the desire to recreate this sensation, somewhere inside the moment where we suspend belief. By utilizing materials that can be found in any local hardware store– radiator covers, plastic tarps, plumbers chain, mosquito netting, epoxy, and steel–she locates a hidden state within them, to reveal their preciousness.

Bio: Afruz Amighi received her B.A. in political science from Barnard College in 1997 and her M.F.A from New York University in 2007. Amighi has shown her work in the United States, London and the Middle East. She is the recipient of the inaugural Jameel Prize, awarded by the Victoria & Albert Museum in London in 2009. In 2011, she was granted the fellowship for sculpture by the New York Foundation for the Arts. In 2013 Amighi’s work was commissioned for the 55th Venice Biennale. Her work is in the permanent collections of the Metropolitan Museum of Art, the Victoria & Albert Museum, the Houston Museum of Fine Art, the Bristol Museum, the Devi Foundation and the Cleveland Museum of Art, among others. Amighi (born in Tehran, Iran 1974) lives and works in Brooklyn, New York.