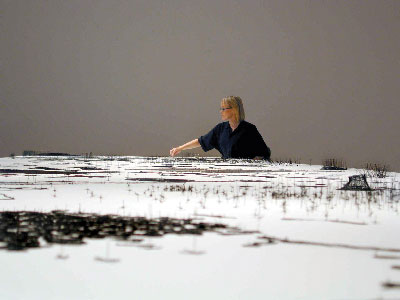 Anne Wilson’s sculpture, drawings, internet projects, and animation have been shown nationally and internationally. In 2005-6 her work was part of the Alternative Paradise exhibition at the 21st Century Museum of Contemporary Art in Kanazawa, Japan. The Contemporary Arts Museum, Houston hosted a major solo exhibition of her work in 2004, and she was included in the 2002 Biennial at the Whitney Museum of American Art in New York. Upcoming 2007 exhibitions include the Museum of Arts & Design in New York and the Victoria & Albert Museum in London. Wilson has received numerous awards including a Louis Comfort Tiffany Foundation grant and fellowships from the National Endowment for the Arts. She is a professor in the Department of Fiber and Material Studies at the School of the Art Institute of Chicago.