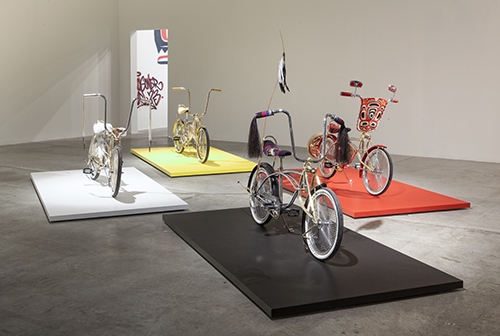 Lowriding, a contemporary yet Indigenous practice, serves as the ideal metaphor to understand what Miner does as a contemporary Indigenous artist. Lowriding is both an ontology and epistemology.  It is an aesthetic and a practice.  As participants in lowrider culture understand, the process of lowriding engages traditional migration patterns, yet employs late-capitalist machinery to traverse colonized landscapes. While our ancestors moved slowly from one place to another, establishing deep roots along the way, contemporaneity and coloniality presuppose that we must hurriedly rush from place to place.

In his artistic and intellectual work, Miner attempts to freely and intentionally migrate across multiple temporalities, engaging precolonial indigeneities alongside colonial, modern, and contemporary responses to colonization. In this talk, Miner will discuss many of his recent artistic projects, including Anishinaabensag Biimskowebshkigewag (Native Kids Ride Bikes), Tikibiing Booskikaamigaag (Spring Grove), Gikinawaabi (Learning to Labour, Learning to Listen, Learning to Sing), and Michif-Michin (the people, the medicine), among others.

Bio: Dylan Miner (Métis) is a border-crossing artist, activist, and scholar based between Anishinaabewaki and Aztlán.  He is Associate Professor at Michigan State University, where he coordinates a new Indigenous contemporary art initiative and is adjunct curator of Indigenous Art at the MSU Museum. He holds a PhD from The University of New Mexico and has published more than fifty journal articles, book chapters, critical essays and encyclopedia entries. In 2010, he was awarded an Artist Leadership Fellowship from the National Museum of the American Indian (Smithsonian Institution). Since 2010, he has been featured in more than fourteen solo exhibitions and been artist-in-residence at institutions such as the School of the Art Institute of Chicago, École supérieure des beaux-arts in Nantes, Klondike Institute of Art and Culture, Rabbit Island, Santa Fe Art Institute, and numerous universities and art schools.  His book Creating Aztlán: Chicano Art, Indigenous Sovereignty, and Lowriding Across Turtle Island will be released this month by the University of Arizona Press. Over the next year, Miner will hang solo exhibitions in Montreal and Winnipeg, while his exhibition Michif, Michin is reviewed in the current issue of Galleries West.